To mark the centenary of man’s arrival at the South Pole, our station held a small ceremony and a fancy dinner for the Norwegian Prime Minister and his party, and Daniel and I were lucky enough to help with making it happen. Daniel ran sound, his coldest and most Southern live sound gig, and he spent many hours preparing for it by researching intensively in the way he does and creating schematics to build cabinets to hold the speakers, to prevent them from freezing up and malfunctioning while still sounding clear and rich and natural.

Standing gathered around the ceremonial pole, with the shrill, hollow protest of footsteps on snow amplified through the sound system, Prime Minister Jens Stoltenberg spoke. After planting Norway’s flag at the Pole, he honored Roald Amundsen and his achievement; Robert Falcon Scott who gave the ultimate sacrifice for discovery; Norway as a brand new country in 1911 (having gained independence in 1905); and the men and women who came to celebrate and honor this important year on skis and sledges, tired and celebrating with frostbite on their faces and ice in their hair. The head of the Norsk Polarinstitutt, having himself skiied in 45 days to follow Amundsen’s ski tracks, wrote a letter to Amundsen on the route from inside his sleeping bag, and he read it to us. An ice bust of Amundsen, molded by a Norwegian artist and poured here, was unveiled.

When we clapped, it was a muffled patter of mittens hitting mittens, a noise like rain in a place that has never seen it. Statesmen and adventurers alike jumped and hugged, lit cigars and drank akavit, tears in their eyes from cold and from overwhelming emotions.

We came in to prepare for the next part of the evening, a dinner for which the head executive chef has been preparing since last year, partially out of excitement and partially due to a very long, slow supply chain. I volunteered (begged) to be a part of the serving staff over a month ago, my waitressing past finally coming in handy here at the Pole. We set the table while the reception happened downstairs in the gym and the band (which Daniel was also a part of) played the national anthem of Norway. When the PM and his group came in for dinner, the champagne was already poured and waiting to be toasted with, servers waiting in the wings and the kitchen staff buzzing in preparation in a nearby conference room. We poured wine, took orders, and brought out an amazing and visually stunning meal (the Prime Minister takes his bison steak medium rare, fyi). The night went perfectly, with no sound malfunctions, no spilled wine or burned coffee, no cracked ice busts, no probems at all. It was exhilarating and relieving and felt so significant, with my Norwegian flag in my server apron pocket the whole night. I felt more Norwegian than I ever have before.

I’m working on photos tonight–more up in 12 hours when the satellite comes back up.

One hundred years ago today, after months of desperate cold, preserved food, wicked dryness and beating wind, after skiing many, many miles and enduring lost and broken gear, tired men, cranky dogs and dangerous terrain, Roald Amundsen and his crew (Olav Bjaaland, Helmer Hanssen, Sverre Hassel, Oscar Wisting, four sledges and 52 dogs) reached the South Pole, alive and happy and sunburned, the first men in history to reach the bottom of our earth. They took measurements to determine their accuracy, and planted the flag of Norway to mark their achievement. 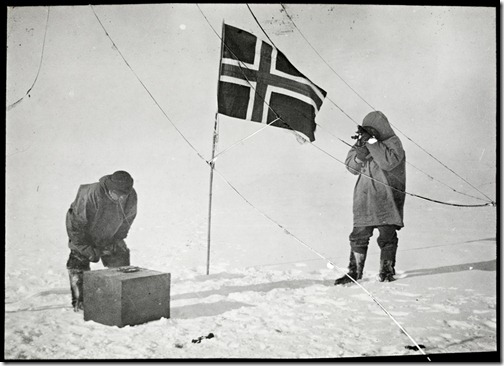 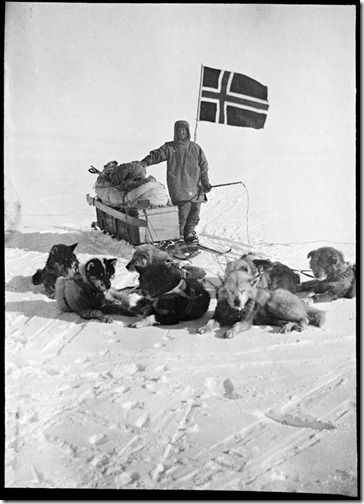 “When the explorer comes home victorious, everyone goes out to cheer him. We are all proud of his achievement—proud on behalf of the nation and of humanity. We think it is a new feather in our cap… But the rails of science are laid; our knowledge is richer than before. And the light of the achievement shines for all time.”

We are so proud to be here and to be a part of the US Antarctic Program, to support in our own small, peripheral ways the science that is carried out: astronomy and astrophysics, aeronomy, auroral, and geospace science studies, meteorology, geomagnetism, seismology, earth-tide measurements, and glaciology. Here we live on the seventh continent, dedicated to science and peaceful international exchange, and we are grateful to be a part of its history.

Happy Centennial, everyone. Here’s to the next hundred years.